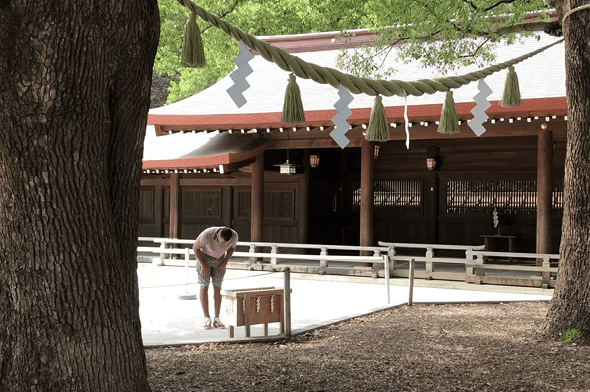 This time we visited Tokyo again, and met up with Émile at Meiji Jingu. It was a bright morning, and the first thing that caught his attention was the massive size of the torii (the gate to a shrine) at Meiji Jingu.

Meiji Jingu
One of the most famous shrines in Japan is Meiji Jingu. It was built to honor the greatly admired Emperor Meiji and Empress Shoken. After their deaths, 100,000 trees from all over the country were donated to build the forest that surrounds the shrine. It took many years, but Meiji Jingu was finally completed in 1920.

Émile had already visited several shrines in Kyushu, so he knew the rules and rituals that go into visiting them. The priests at Meiji Jingu were quite surprised by Émile’s knowledge and respect for Japanese tradition. During his visit, he saw brides and grooms in traditional Japanese wedding attire—kimono and hakama (traditional ceremonial clothing)—while making their way through the grounds of the shrine. At the same time, a couple was asking for favor and protection for their newborn during a Shinto rite of passage called hatsumiyamairi.

Also in Harajuku is one of the unique cafes in Japan. The Kawaii Monster Cafe was designed to overwhelm customers with cuteness. The servers are dressed in wild and vibrant clothes and perform wacky dances. The architecture and furniture almost feel alive. The food can only be described as bizarre—rainbow noodles, alien cakes, chocolate chicken, and more. However, the zaniness didn’t faze Émile. “This place is insane,” he exclaimed. “But it’s perfect for kids!” 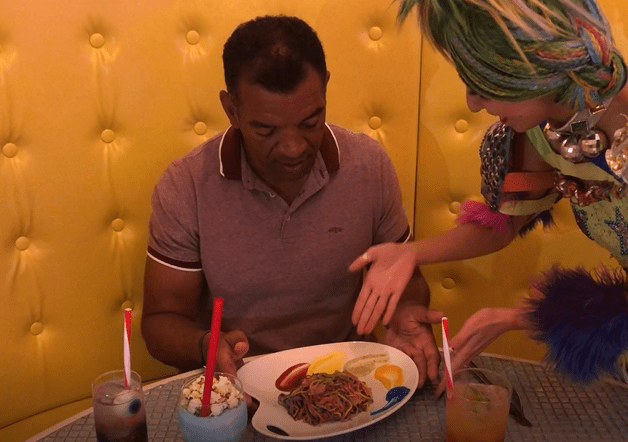 After the cafe, Émile hopped on the local train to Shibuya—just one station away from Harajuku. Shibuya is Tokyo’s most well-known shopping and entertainment district. It’s home to the famous Hachiko dog statue and iconic Shibuya Scramble Crossing. More than half a million peopl e cross this celebrated intersection every day.

Japan Olympic Museum
Unfortunately, he couldn’t stay long because the newly opened Japan Olympic Museum was waiting for him. Run by Japanese Olympic Committee, the museum, whose concept is ‘Olympic Museum for everyone’, teaches visitors about the history and significance of the Olympic and Paralympic Games. Émile, a former rugby player himself and father of two rugby players, felt very touched by the atmosphere.
Émile said the architecture was beautiful and he thought it was the kind of place where one could build new memories with each visit. Several interactive experiences can be found at the museum that allow visitors to compare their abilities with those of an Olympic athlete. 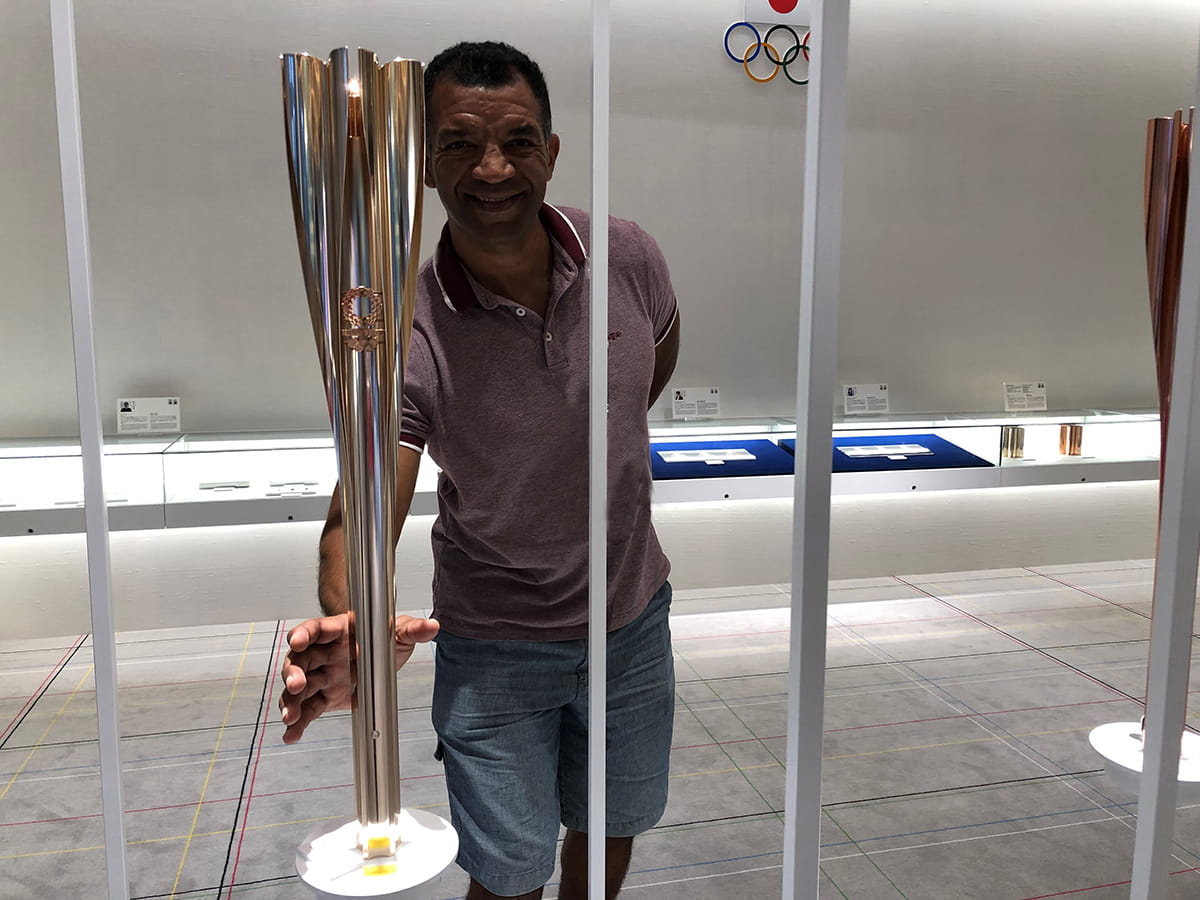 Akihabara
The next day, Émile visited Akihabara. The neighborhood is Japan’s otaku (geek) district, where videogame and electronic stores line every road, and back alleys are stuffed with shops specializing in fandom, from toys and comic books to posters and animation.

It was the perfect opportunity to shop for souvenirs. The only problem: there was just too much! Émile had no choice but to call up home and ask friends what they wanted.

Speaking of choices, choosing lunch in Akihabara is no simple feat. However, this is Japan, and a proper foodie shouldn’t visit Japan without experiencing kaitenzushi, or conveyor belt sushi. These restaurants have conveyor belts that deliver sushi directly to customers. If you see something you like, you simply take it off the line. It’s a fun and inexpensive way to eat sushi. Émile said he couldn’t believe the efficiency of the restaurant—or the price! His favorite was the maguro (tuna), but he was fortunate enough to visit during autumn to enjoy seasonal fish such as sanma (Pacific saury) and kanburi (Japanese amberjack).

Final Stop
The final destination of Émile’s cultural trip through Tokyo was a tea ceremony at the Imperial Hotel, Tokyo. Although the tradition originated from China, the Japanese tea ceremony evolved over 700 years to develop its own style and rituals. One of the primary concepts behind the tea ceremony is wabi-sabi—a Japanese aesthetic principle based on the beauty of impermanence. Everything, from the movements of the server to the temperature of the water, is a part of the art and the tea ceremony can take years to master. The entire experience is intended to lead you to a peaceful state, and it was a perfect end to Émile’s lively trip around Tokyo.

The culture of Japan is very nuanced. It respects sacred shrines and ancient rites but also emphasizes cuteness and fandom. It’s what makes discovering the country so special. No matter what your interest is, you can find it in Japan.