A team sport that crosses all barriers

Volleyball is a fast-paced sport played in an area of approximately 9 meters square; the rules of the game are players must return the ball to the opponent's court within three touches without dropping it. It's a popular team sport in which players of all ages and genders.

Local champion SAKODA Saori has previously represented Japan in volleyball in two Olympic Games as a national volleyball team member. We asked her about the appeal of volleyball as a competitor and how she enjoys the city of Tokyo.

Ms. Sakoda started playing volleyball when she was in the third grade of elementary school. 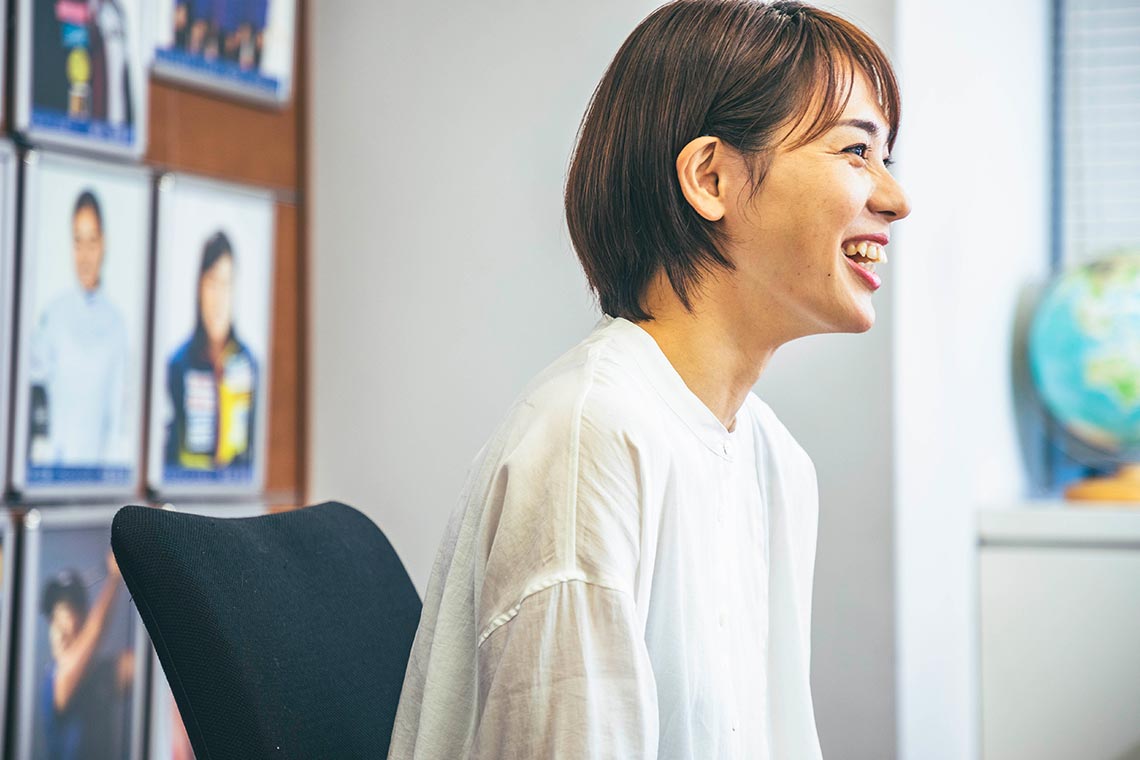 “My sister, who is two years older than me, was playing volleyball in a youth sports team, and I admired the way she and her teammates practiced together in harmony, so I joined the team myself,” she explains.

“When I started learning volleyball, the first thing that discouraged me was the pain I felt when receiving the ball. But I persevered, and I gradually stopped feeling the pain,” she says.

“I chase after the ball, pick it up, connect with everyone, and return it to the opponent’s court. Rather than the competition, what attracted me to volleyball was the act of doing something with my friends.”

Sakoda was a member of the volleyball club in junior high and high school and was also selected for the National Athletic Meet. Her performance caught the eye of a businessman, and upon graduation from high school, he joined the Toray Arrows volleyball team.

“The team was a complete change from my student days,” said Sakoda. “It was a group of top-notch players selected from strong schools all over the country. What surprised me was not only the players’ quality but also the staff. They provide technical, physical, and mental support for the players and support the team from all backgrounds, including data analysis of the opposing team.”

“After joining the team, I also felt the presence of the spectators who support the team greatly,” she said. “I want to play an active role for those who support me, and being able to think that way has supported my career.”

Wearing the uniform of teammate Mizuho Ishida at the London Olympics 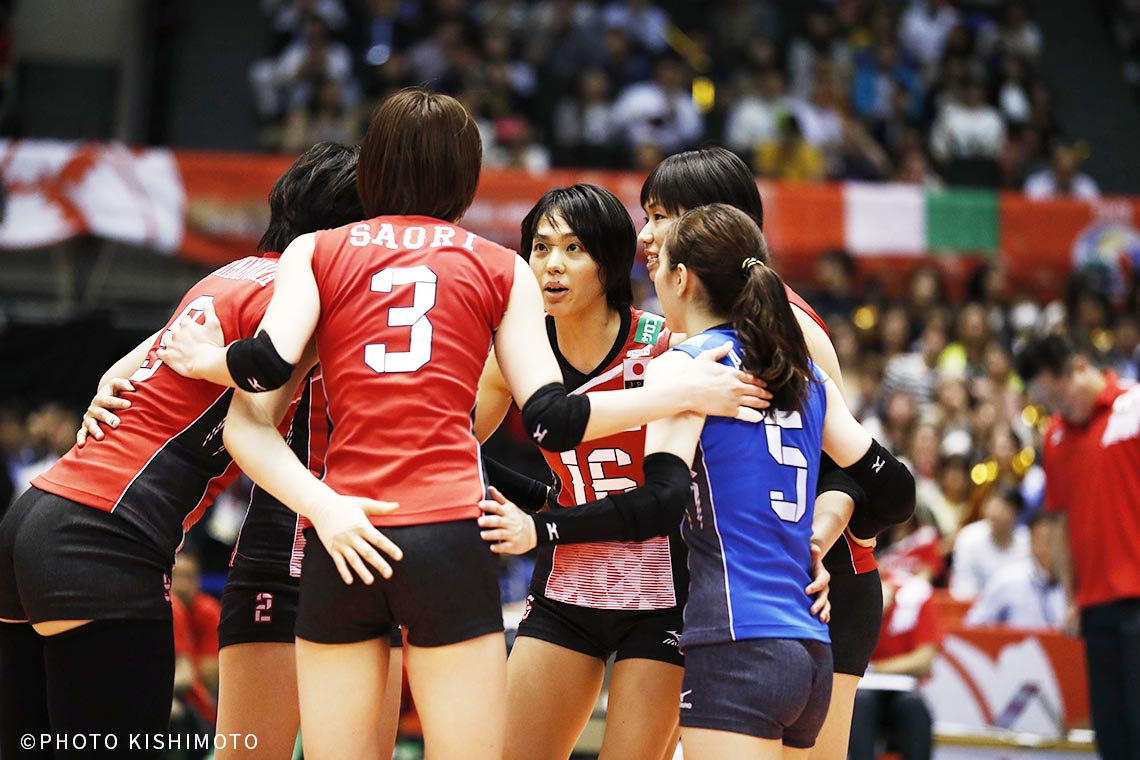 Sakoda competed in two consecutive Olympic Games, in London 2012 and Rio 2004. She contributed significantly to the team’s bronze medal as an attacker in London.

In the third-place match against Korea, she wore the uniform of her classmate Mizuho Ishida underneath.

“Even though she was not selected for the 12-member Japan team, she came to London with me and supported the team. When she returned to Japan before the match, the uniform she left behind was like a good luck charm. I was confident that we could win!”

“I felt confident that I could win the match, and I was able to make my best play. My role is to live up to the expectations of those who support me. Feeling this mission, we worked as a team and won the medal, which is now a precious treasure for me.”

The sense of unity on the court was evident even to those watching the games.

“I was impressed by the players’ efforts, as both teams kept rallying without dropping the ball. On the other hand, the high, dynamic spikes are exciting to watch. From a spectator’s point of view, the charm of volleyball lies in the fact that you cannot predict who will win until the final 25th point,” Sakoda explains.

It is not uncommon for a team on the ropes to turn the tide with a single play by a player who does not give up and picks up the ball. It is always exciting to watch a match unfold that you can’t take your eyes off of until the very last minute.

Tokyo 2020 Games impressed me with the dedication of the athletes. 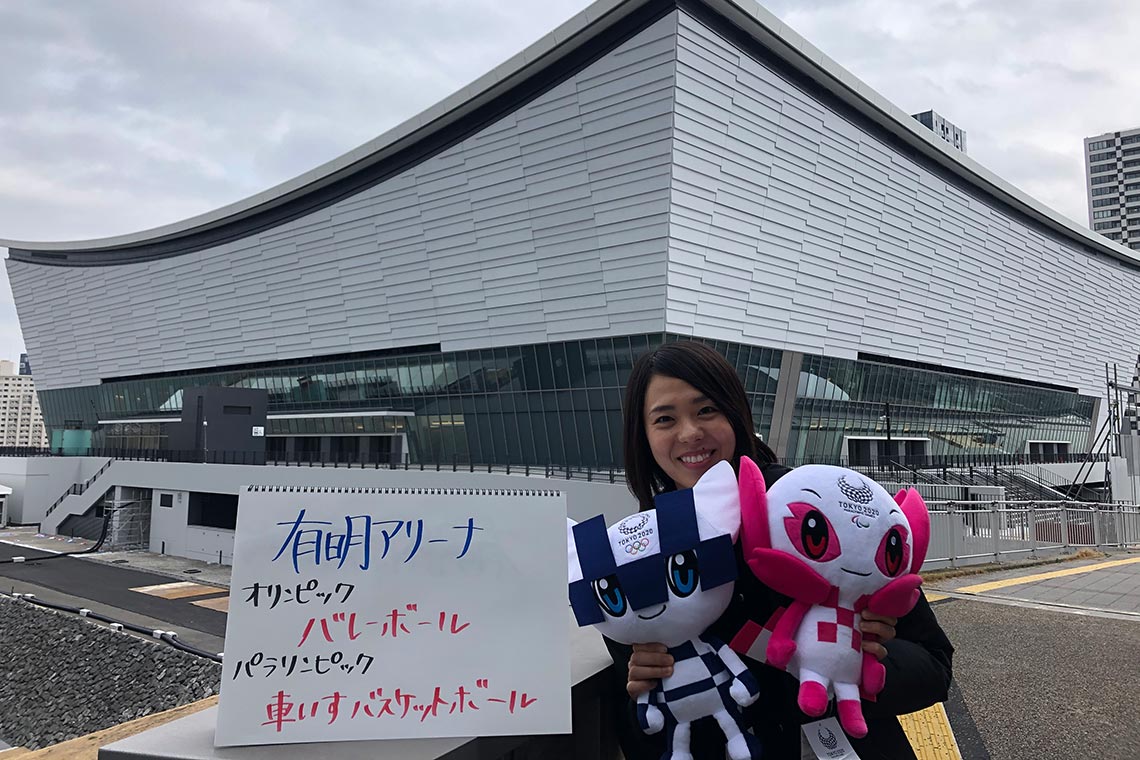 Sakoda was an experienced Olympian commentator at the Games of the XXXII Olympiad.

She said, “In the games, I have experienced, it is usual for the spectators to get excited with their cheering. However, this time, there were no spectators, which was an unusual situation. I was struck by the way the athletes gave it their all in the face of such circumstances.”

“I want to reward my fellow competitors and those who support us. I could feel this desire from how the athletes fought and the interviews they gave at the event.”

She also says that watching the other competitions and being involved with the athletes was a valuable experience for her.
For example, the 3×3 (Three X Three) basketball competition was newly adopted as an official event at this year’s tournament.

“Although it is the same ball game, it was interesting to see how the players used their bodies in a completely different way than in volleyball,” she said. “The most exciting part of the event was the rapid changes in offense and defense and the team’s coordinated play one after the other. I was impressed by the skillful steps, passing, and shooting, the players’ physical strength as they moved around without a moment to catch their breath, and the players’ mental strength as they quickly changed their minds. Learning about these new disciplines is another attraction of the Olympics, isn’t it?” 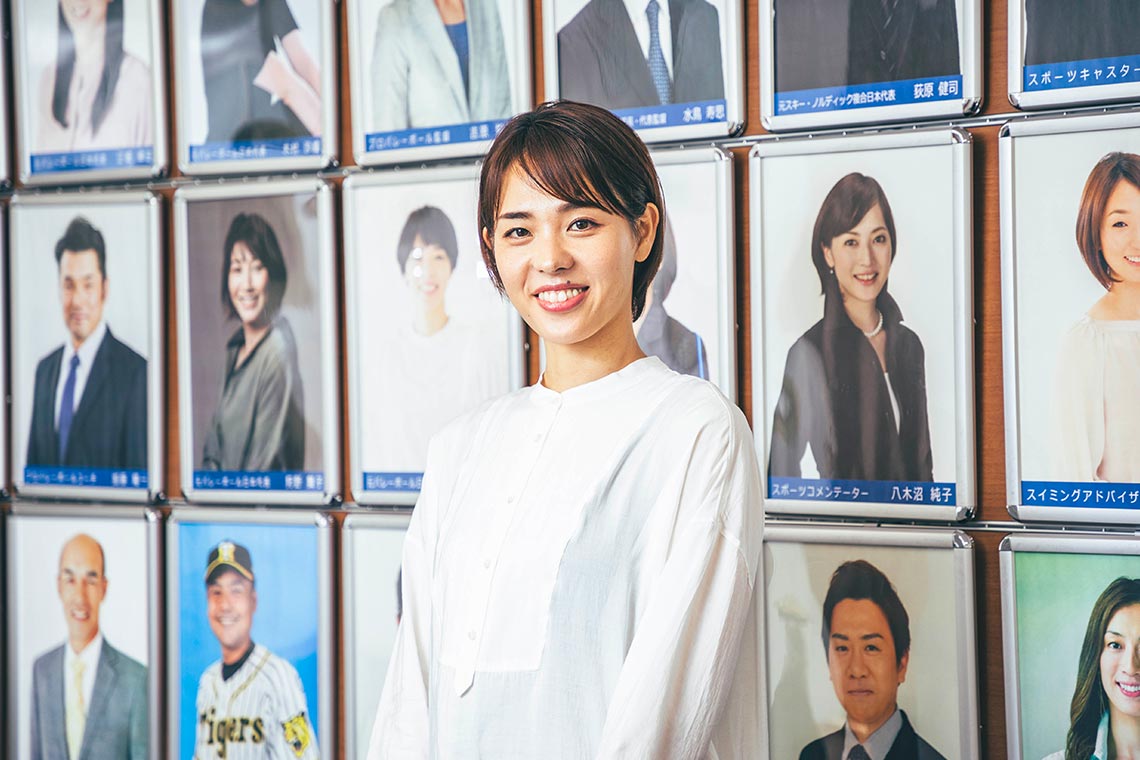 Sakoda usually spends most of her time in her hometown of Kagoshima. So we asked, what do you enjoy doing when you come to Tokyo?

“I like to walk around looking at the various buildings. It is fun to see modern buildings in a big city, but I also like to see old buildings such as shrines, temples, and the brick buildings of Tokyo Station. Among them, I like Tokyo Tower, which rises in the middle of the city, whether seen from afar or up close. I think its imposing presence symbolizes Tokyo, the capital of Japan.”

On the other hand, she’s impressed by the increased number of volleyball facilities. “Volleyball is an indoor sport, but recently beach volleyball, which you can enjoy outdoors, has become very popular. In Tokyo, beach volleyball courts have been permanently installed at the Omori Waterfront Sports Square near Shinagawa Station. There are now more places to enjoy volleyball at sightseeing and shopping spots such as the rooftop of MIYASHITA PARK near Shibuya Station and Odaiba Kaihin Park. I hope that many people will become familiar with volleyball while enjoying the attractions of Tokyo.”

＜Profile＞
SAKODA Saori
Born in Kagoshima City in 1987. After graduating from high school, she joined the V-League's Toray Arrows in 2006 and became a member of the Japan national team in 2010. She played in many world tournaments with her back attack, contributed significantly to winning the bronze medal at the 2012 London Olympics, and competed in two consecutive tournaments in Rio de Janeiro in 2004. She is currently active in a wide range of activities, including commentating on major volleyball tournaments, appearing on TV and at events, and teaching volleyball lessons. 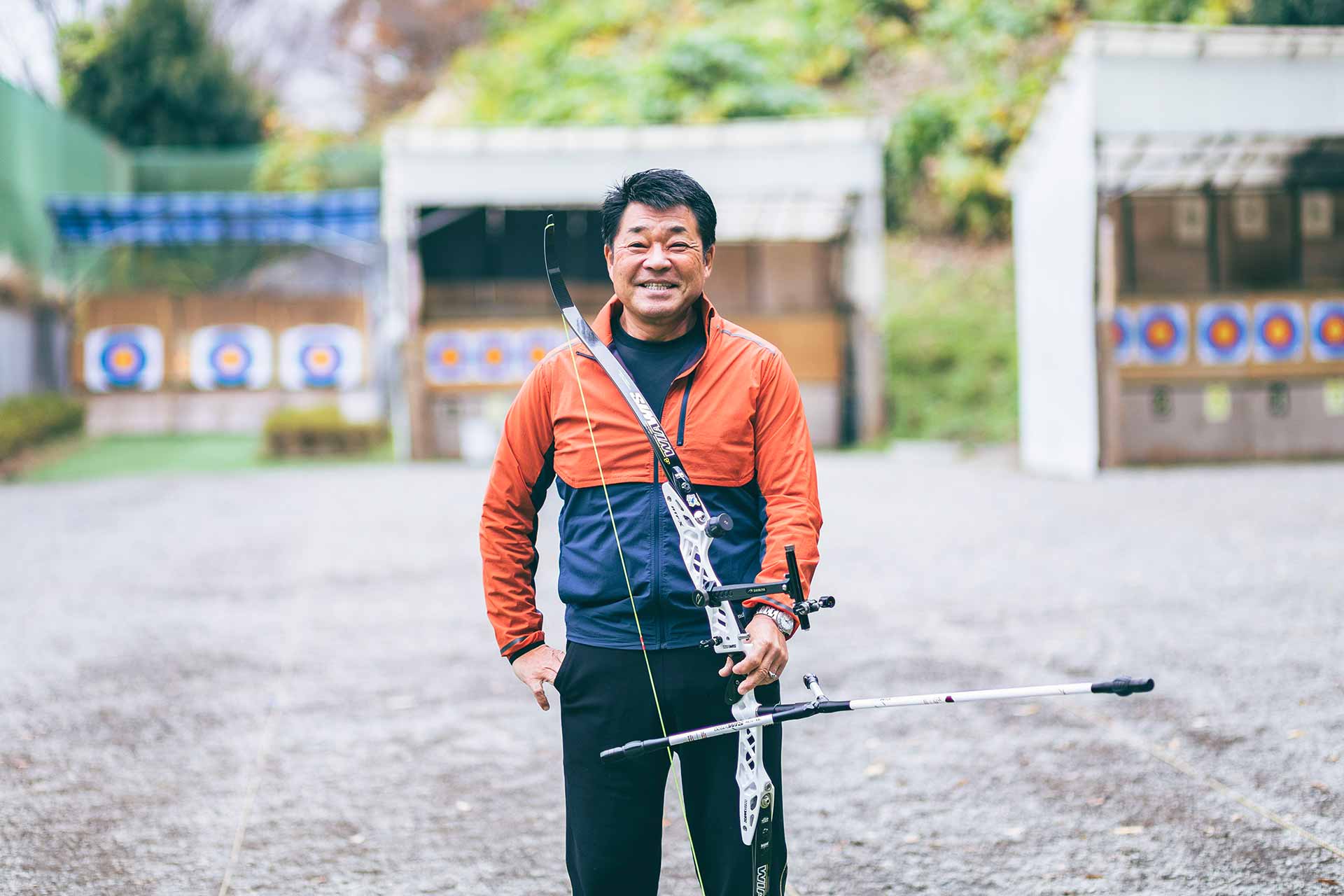 YAMAMOTO Hiroshi: Tokyo, a city of convenience and variety